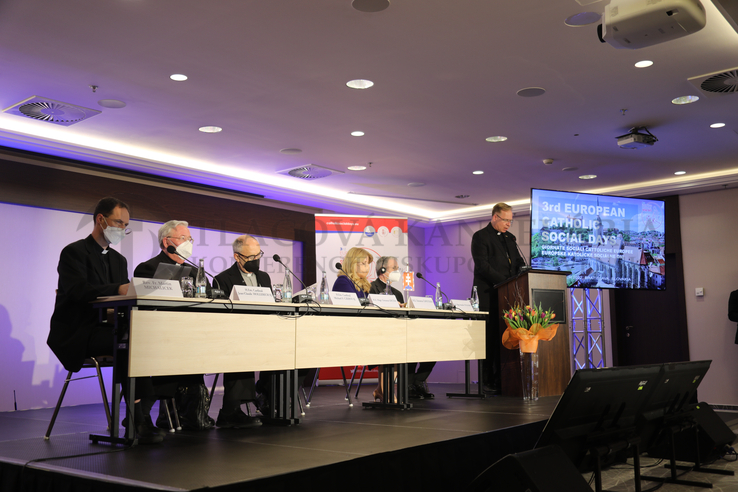 Following the days held in Gdansk (2009) and in Madrid (2014), the third edition of the European Catholic Social Days – entitled “Europe after the pandemic – towards a new beginning” – was held in Bratislava from the 17th till the 20th of March. This meeting gathered hundreds of delegates of the Bishops’ Conferences to discuss the most pressuring social challenges in Europe and reflect on the demographic, technological and ecological transition processes taking place in European societies. Daniel Darmanin, President of the Justice and Peace Commission (Malta) attended the conference as a representative of the Maltese Episcopal Conference.

On the occasion of the opening session, the Holy Father addressed the participants of the event with a message focused on the current war and humanitarian crisis in Ukraine.

“The distressing cry for help of our Ukrainian brothers and sisters urges us as a community of believers not only to reflect seriously, but to weep with them and to do something for them; to share the anguish of a people whose identity, history and tradition have been wounded”, reads Pope Francis’ message.

“Once again humanity is threatened by a perverse abuse of power and vested interest, which condemns defenceless people to suffer all forms of brutal violence”, the message continues.

While thanking all those who acted with a “prompt and coordinated response in coming to the aid of the people, guaranteeing them material help, shelter and hospitality”, the Holy Father prayed for a general “commitment to rebuild an architecture of peace at the global level, where the European home, born to guarantee peace after the world wars, plays a primary role”.

The European bishops participating in the European Catholic Social Days also welcomed Pope Francis’ invitation to the bishops of the world and their priests to join him in praying for peace and in consecrating and entrusting Russia and Ukraine to the Immaculate Heart of Mary.