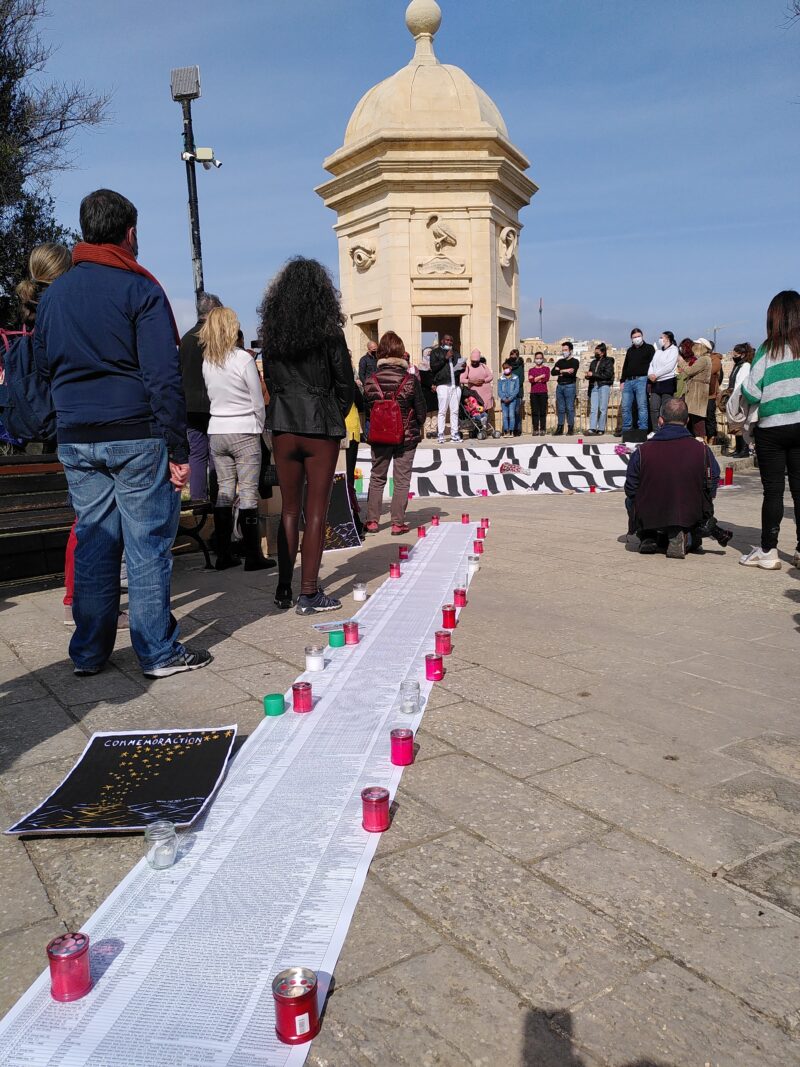 The Mediterranean remains one of the deadliest migratory routes, with thousands perishing every year. Time and time again, we witness the Maltese authorities absconding on their duties to rescue desperate people seeking asylum in our search and rescue zone.

Together with people across the world, we strongly denounce the deadly violence of the world’s border regimes, and call on the responsible authorities, to respect human rights, international law, law and the 1951 Geneva Refugee Convention, and to act humanely to prevent deaths and disappearances from happening.

A number of organisations and individuals gathered in Senglea by the harbour to commemorate people who have died, gone missing or become victims of enforced disappearance on their journey across the world’s borders.

This event is one of many taking place across the world to mark the Global day of CommemorAction where people stand in solidarity with the relatives of those who died or disappeared along migratory routes and call for action to prevent this from happening.

Time and time again, we read reports of Maltese authorities collaborating with the Libyan Coastguard in illegal pushbacks.We also regularly read reports of Malta either ignoring distress calls or refusing rescued persons to be disembarked in Malta. And worse, we witness asylum seekers subjected to degrading and humiliating treatment, like the shocking imprisonment of people on Captain Morgan boats in 2020.

We remind the authorities that these are mothers, fathers, sisters, brothers, children and people with names, not numbers.

We call on the authorities to remember that saving lives at sea is a legal and moral obligation. Furthermore, human rights law and international law require states to safeguard the right to seek asylum and to treat asylum seekers with respect and dignity at every stage of the process.

We also call on EU institutions to offer strong assistance measures to ensure Malta and other member states can offer the safety and dignity these people are entitled to.

Why has the 6th of February been chosen for the CommemorAction?

On the 6th of February 2014, the Spanish border police killed at least 15 people who were trying to cross the border at Tarajal into the Spanish enclave of Ceuta.

The migrants drowned in front of the Guardia Civil, who fired rubber bullets and used other riot gear on them.

This event has become a shameful symbol of dehumanising migration policies.

After years of legal procedures, Spanish courts acquitted the Guardia Civil officers, ruling that no crime had been committed.

The victims and their families are still waiting for justice.

On the 6th of February 2019, groups of families of the deceased, missing and/or victims of enforced disappearance met in Oujda for the first CommemorationAction of migration victims and to denounce border violence.

The Tarajal massacre is a symbol of what has been happening every day for over 20 years now: victims without justice, graves without names, borders without rights.