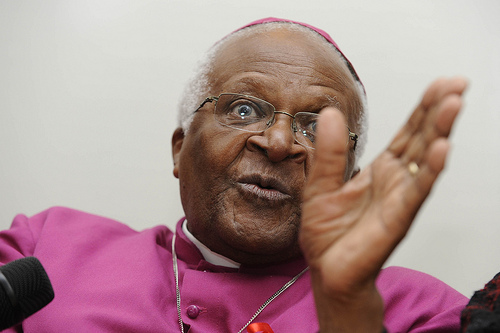 A few days ago, Desmond Tutu, the former Anglican archbishop of Cape Town, South Africa, who rallied the world behind the anti-apartheid struggle in a way that made him a prophet of reconciliation of our times, died at the age of 90.

Tributes flowed in from all over the world to recognize the many qualities of a man who never stopped practicing the forgiveness he preached. Tutu was constantly hounded by the authorities for consistently hammering home – in words and in deeds – his “simple” demand: “All we are asking of you to do is to recognise that we are humans, too.” In fact, Desmond Tutu firmly believed that all South-Africans were “less than whole” because of apartheid: the black South Africans who suffered horrible discrimination, but also the privileged whites who under this regime were becoming more uncaring and less compassionate. And therefore less human.

As we mourn this giant of the apartheid struggle, we might want to reflect on how his prophetic witness can shed a light on the challenges we are facing as a country. Thankfully, Malta doesn’t have to deal with the sort of systemic and widespread violent injustice which existed under the apartheid regime. And yet, in a society which seems increasingly intent on destroying people, we urgently need to restore our relationships. Just to mention the latest two examples which occurred over the Christmas period: Paulina Dembska was the latest woman to suffer a terrible death at the hands of a man and Ahmed Adawe Diriye was treated as “Mr X” in hospital before succumbing to injuries he suffered at his workplace. And all this in the context of a country which has still not come to terms with the wound brought about by the assassination of its foremost investigative journalist more than four years ago and where our political landscape has become increasingly polarized and nasty, with no real willingness to work and dialogue together for the common good.

After Nelson Mandela’s election as South Africa’s first black president in 1994, Tutu was asked to head the new government’s Truth and Reconciliation Commission, a ground-breaking exercise in restorative justice, whose main aim was that of restoring good relations rather than punishing culprits. From Tutu’s experience as Chair of this Commission we can also learn that it is only forgiveness which enables us to restore our relationships. However, this forgiveness is not to be confused with a cheap form of reconciliation which pretends that things are other than they are and seeks forgiveness by inviting people to turn a blind eye to wrongs suffered and “let bygones be bygones”. True reconciliation can never avoid a painful confrontation with the past, given that those who forget the past are doomed to repeat it.

A man of God, Desmond Tutu strongly believed that the Gospel message carried within it the seed of holy restlessness and righteous anger which gave him the necessary courage to fight racism and injustice wherever he encountered them. Even when all the odds were up against him, Desmond Tutu never gave up on his dream of a reconciled society. Neither should we. This quest for true reconciliation in our families, Churches, communities and society is indeed a risky undertaking, given that the process necessarily exposes all the pain, wounds and hurts. Sometimes it could even make things worse. But in the words of Archbishop Tutu, “in the end it is worthwhile, because in the end only an honest confrontation with reality can bring real healing. Superficial reconciliation can bring only superficial healing.”