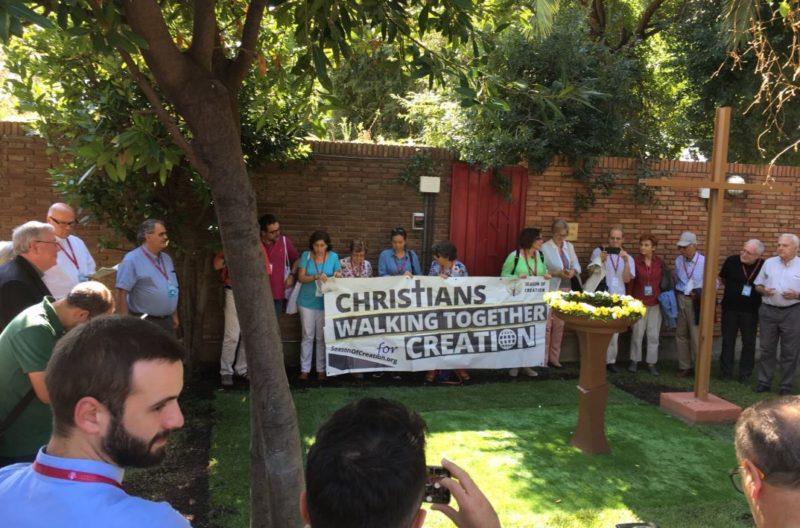 Top Catholic leaders from around the continent were present together with public authorities and experts. Among them, H.E. Mgr. Jean Claude Hollerich, Archbishop of Luxemburg, President of Justice and Peace Europe and president of COMECE was joined by Cardinal Juan José Omella, Archbishop of Barcelona, H.E. Joan Enric Vives, archbishop of La Seu d’Urgell and Co-prince of Andorra, former accompanying bishop of Justice and Peace Spain, H.E. Sebastià Taltavull, bishop of Mallorca and accompanying Bishop of Justice and Peace Spain, H.E. Angelo Massafra, Archbishop of Scutari-Pult, member of the Commission for Pastoral Social Work Member of the Council of Bishops’ Conference in Europe (CCEE). Mr Tebaldo Vinciguerra, collaborator of the Dicastery for the Promotion of Integral Human Development, inserted the issues related to the right to access to water in the framework of the core principles of the CST and insisted on the connections between the implementation of this right, education, lifestyles and cultures. He also underscored that recent pronouncement of the Pope and the Holy See insisted frequently on water and spirituality (link Message on the World Day of Prayer for the Care of Creation).

To mark the occasion of the workshop, a coalition of justice and ecology institutions organized a European symbolic action. The action, titled “Via Aqua,” saw leaders walk through the area of the Llobregat River Delta. Leaders contemplated water as their “sister,” following the words of St Francis.

Leaders brought stories of the waters in their home countries.

The leaders symbolically enacted their commitment by immersing their hands in a bowl of water, the “Source of Tears” which represented the suffering of “sister water” and their promise to protect her. These events fall within the Season of Creation, an annual celebration of prayer and action to protect creation. The Season is an ecumenical celebration shared by many Christians. It runs annually from September 1 through October 4, the Feast of St. Francis, who is the patron saint of ecology in many traditions. The theme of this year’s celebration is “walking together”.

Mgr. Jean-Claude Hollerich, Archbishop of Luxembourg and President of the Conference of European Justice and Peace Commissions said: ‘This year’s symbolic action was a moving experience. Praying and walking in silence through the fragile ecosystem of Llobregat river delta allowed us to better connect with each other, with nature and with God. It allowed us to better listen to the cry of sister water.’Cecilia Dall’Oglio, European Programs Manager of Global Catholic Climate Movement, which helped organize the symbolic action, encouraged the event by saying: ‘Justice and Peace Commissions
demonstrated their strong will to engage their Bishops’ Conferences in living Laudato Si’ in Catholic communities, in particular on occasion of Season of Creation.’ Global Catholic Climate Movement is a community of over 650 member organizations and thousands of Catholics responding to Pope Francis’ call to action in the Laudato Si’ encyclical.

The Justice and Peace Commission of Malta brings the cry of sister water through seawater from the beaches of Malta, where prioritisation of economic gains, and lack of will to change our methods of consumption, is increasingly making our bathing waters a less healthy environment. The ever-increasing amount of ships which pass by the islands is polluting our waters with fossil fuels, the fish farming industry is damaging areas of the sea-bed, and every now and then slime from this industry washes up on our shores. This cry is also the cry of the people who cross these waters in search of a new life, yet many face hostility and death in these waters.

All documents can also be consulted on the web-site of Justice and Peace Europe: www.juspax-eu.org