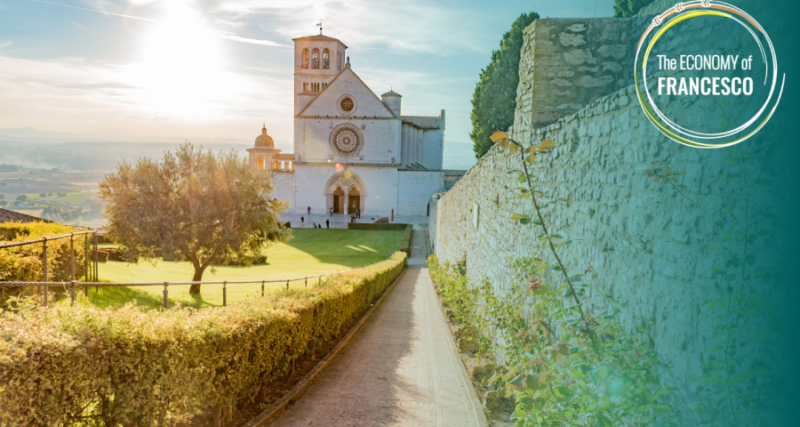 Economy of Francesco, a prolific time for generative processes

The ‘Economy of Francesco’, virtually held in Assisi from 19th to 21st November 2020 left an important legacy of hope with thousands of young economists, entrepreneurs and change-makers from 115 countries committed to stop “that economy that kills” and to generate a new cultural, economic, social and political system. Those three days were rich in points of reflections, coming from different seminars and workshops.

On day 1, Cardinal Turkson, prefect of the Dicastery for Promoting Integral Human Development, invited us to imagine a sustainable economic development, shifting from a liquid economy to a social economy which invests in people, life and job creation. A meaningful topic is the recognition of dignity of labour, that has as reference point each individual as human being and not roles such as CEO or cleaner. A very interesting seminar on Economics and Peace defined peace as universal good, neither a private good or a common good, but a good belonging to all mankind. A very interesting consideration is the connection between peace and creation: peace is closely related to care for ecology, violence and conflicts lead only to destruction, affecting also the cognitive health of people. Therefore, a call for a global ban of weapon-makers from stock exchanges and strong international regulators for the weapon sector could help to reduce the size of this industry of death. A conference on different business models demonstrated that profit and human dignity can co-exist and they are valuable for all stakeholders: shareholders, managers, employees, suppliers, clients, governments and the whole society.

On day 2, the reflection started from how generative processes can overcome the circuit production-consumption, current paradigm of our economy, and they can become drivers for civil economy, based on a new paradigm: going beyond homo oeconomicus; inclusion of the role of gift and relational values within economics, meaning of value beyond GDP; economic policy with four hands, market, institution, active citizenship and generativity. This economic thinking begins from individuals as self-interested being, but conscious that the achievement of his happiness can’t be separated from the achievement of other people’s happiness. Successively, Prof. Muhammad Yunus, Nobel Prize for Peace graduate in 2006, called for a world with three 0s: 0 net carbon emission, 0 wealth concentration and 0 unemployment. He invited to actually change the world and finance can help to pursue this objective, because finance can help in whatever we want, we need only to decide the destination and we’ll make it happen. Consequently, seeing is not enough, judging is not enough, it’s time to act to change the world. The last seminar of the day encouraged to discover once again the sacramental value of the bread and to stop Earth’s destruction and exploitation.

On day 3, village Vocation & Profit, one of the twelve thematic groups that prepared the event’s works, presented their toolbox made by heart, head and hands, three main tools of creative tension that meets vocation with profit. A concrete action is the project “The Profit Podquest”, designed within Vocation and Profit village to narrate stories of people that have already become actors of this new economy through their vocation. Some food for thoughts about the conventional classification between developed and developing countries were provided during the meeting “We are all developing countries” because in an interconnected world like ours, big problems have global effects and these first two decades of 21st century can prove it: the financial crisis in 2007-2008, climate change and the ongoing health crisis.

In the final statement and commitment, a set of proposals coming from different villages of Economy of Francesco, were presented with ideas encompassing

At the end, Pope Francis’ message to all participants, reminded us that this event is not “an endpoint, but rather the beginning of a process”, based on three pillars: vocation, culture and covenant.

Following the example of Francis’ call, we need to say “yes” to build a new normality and not to leave this event as an empty and passing outcry we “are called to have a concrete impact on cities and universities, workplaces and unions, businesses and movements, public and private offices, and to work with intelligence, commitment and conviction in order to reach the centres where ideas and paradigms are developed and decided”. It’s time to dare new development models, which think with people and not for the people, systems of integral human development where politics and economics “enter in to a frank dialogue in the service of life, especially human life”.

Finally the Holy Father invited us not to “fear to enter courageously the conflicts and crossroads of history in order to anoint them with the fragrance of the Beatitudes. Do not fear, for no one is saved alone.”

And after greetings and thanksgivings, here is that sentence on the screen “this is just the beginning…”.