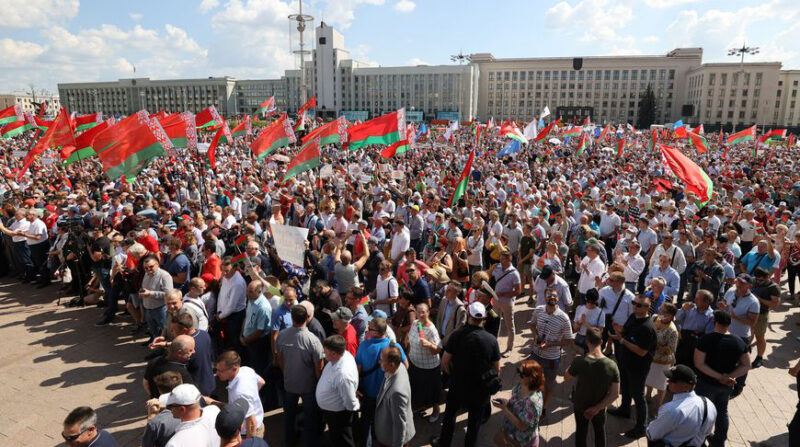 Statement of the Executive Committee of Justice & Peace Europe on the current situation in Belarus.

Following the Presidential election in Belarus held on 9 August 2020, thousands of protesters took to the streets to reject the election results as manipulated, leading to violent clashes with the country’s security forces. According to reports, the disproportionate violence deployed by Belarusian authorities has cost at least two lives and caused hundreds of injuries. About 6000 demonstrators have been detained and many of those subsequently released bear the marks of torture. Moreover, the crackdown on civil rights and freedoms has intensified. This alarming situation poses a serious threat to justice and peace not only in Belarus but in the entire region.
On behalf of the Conference of European Justice and Peace Commissions (‘Justice & Peace Europe‘), we denounce any form of violence and strongly condemn the use of torture by Belarusian authorities against detained protesters. We also call for the immediate release of all who have been arrested without any justification.

We urge the Belarusian authorities to fully respect human rights, including the right to life, the prohibition of torture, the freedom of assembly, media and expression, and to adhere to democratic principles.
We welcome the unity of the Member States of the European Union in showing their solidarity with the people of Belarus and we express our support for the efforts of the EU to work on targeted measures against individuals responsible for grave human rights abuses.

We join the Catholic Bishops of Belarus1 in their appeal for seeking the truth on the basis of a peaceful and inclusive dialogue between Belarusian political leadership and broader society to avoid further violence.

We invite all Christians to unite in saying the Lord’s Prayer for the Belarusian people on Tuesday, 18 August 2020, at 18:00 CEST so that truth, justice and peace may prevail.