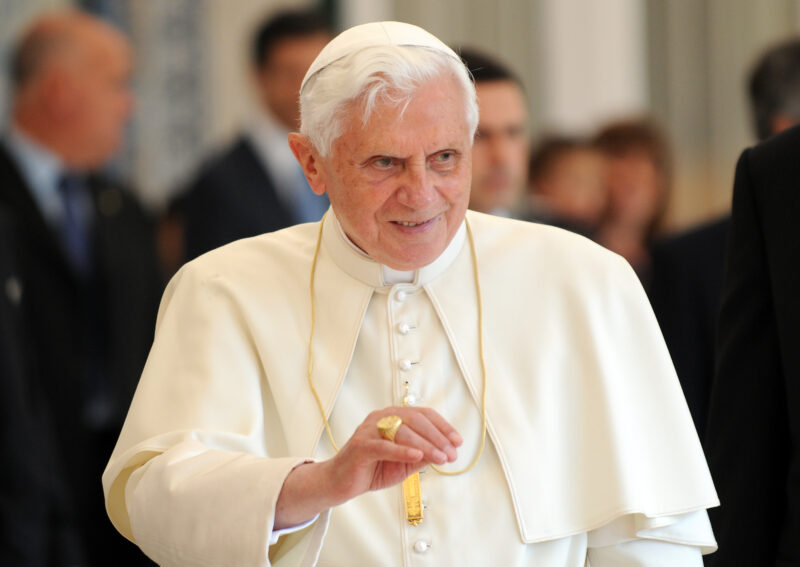 A lot is being written these days about the figure of Benedict XVI, a pope of great intelligence, formation and humility, who will certainly go down in history books as a great theologian. In this brief article, I wish to summarize, what, in my opinion, were Benedict’s greatest contributions to the Social Doctrine of the Church.

When going through the writings of the different Popes, we will often notice quotes from their predecessors and or even from their previous writings. Given that the Magisterium of the Church builds on the work of previous Popes and interprets reality in the light of the Gospel and Tradition, this is not at all surprising.

The Social Doctrine of the Church owes much to Benedict XVI. His encyclical Caritas in Veritate (CV), published four years after the beginning of his pontificate, speaks of the need to promote a development of our globalized society which is built on justice and respect for the good common. The encyclical begins by saying that “charity in truth, to which Jesus Christ bore witness by his earthly life and especially by his death and resurrection, is the principal driving force behind the authentic development of every person and of all humanity.”

Following in the footsteps of Paul VI in Populorum Progressio, Pope Benedict focuses on the development of individuals and peoples. He says that when the Church announces, celebrates, and acts in charity, it promotes that integral development of human beings which presupposes the responsible freedom of individuals and communities. No structure can ever guarantee such development from the outside. Human responsibility and truth can never be ignored. Out of concern for the uneven development that is taking place in the world, the Pope expresses his sorrow for the hunger that plagues the world and speaks of the right to food and water. Regarding food insecurity, the CV speaks of the need, in poor countries, of a long-term vision in agriculture, which invests in rural infrastructure, irrigation systems and market organization. Moreover, any innovation must also respect the environment, be attentive to the needs of disadvantaged populations and involve local communities. These points were subsequently developed by Pope Francis in his encyclical Laudato Sí.

In this brief article, it is not possible to go into all the details of CV. However, there is an issue mentioned in this encyclical which is also mentioned by Pope Benedict XVI in other writings of his:  concern for the environment.

“The ecological question” is received by Benedict from Tradition, especially from Saint John Paul II. He then develops it further, whether in CV or in his messages for the World Day of Peace which is celebrated annually on the 1st of January. Caritas in Veritate speaks for the first time of the responsibility to care for nature based on the responsibility we have towards future generations: “Today the subject of development is also closely related to the duties arising from our relationship to the natural environment. The environment is God’s gift to everyone, and in our use of it we have a responsibility towards the poor, towards future generations and towards humanity as a whole.”

In the Message for the World Day of Peace in 2007, Pope Benedict used the expression “ecology of peace” and explained that the destruction of the environment, its improper or selfish use and the hoarding of the earth’s resources generate friction, conflicts and wars, precisely because they are the result of an inhuman concept of development. In this message, he speaks of nature as our “common home”, a concept that Pope Francis will use as a subtitle to the encyclical Laudato Sí: On care for our common home.

In his message for the World Day of Peace in 2010 entitled “If you want to promote peace, protect creation”, he develops this concept further by quoting his predecessor, Saint John Paul II: “In our day there is a growing awareness that world peace is threatened … also by a lack of due respect for nature”. According to Pope Benedict, “ecological awareness, rather than being downplayed, needs to be helped to develop and mature, and find fitting expression in concrete programmes and initiatives”. Quoting from CV, he adds that it is necessary to review our development model, whilst reflecting on the meaning of the economy and its functioning.

In other writings, the Pope also called for a reduction in military spending and insisted on the need for nuclear disarmament.

Another topic which was frequently touched upon by Benedict XVI during his pontificate was world hunger which he mentioned especially in his annual letters to the General Director of the Food and Agricultural Organization of the United Nations (FAO). Finally, migrants and refugees were also the subject of papal messages, with a special focus on minors, young people and women who suffer uprooting and loneliness.

Adapted and translated from an article by Isabel Cuenca, Secretary General of Justice & Peace – Spain.